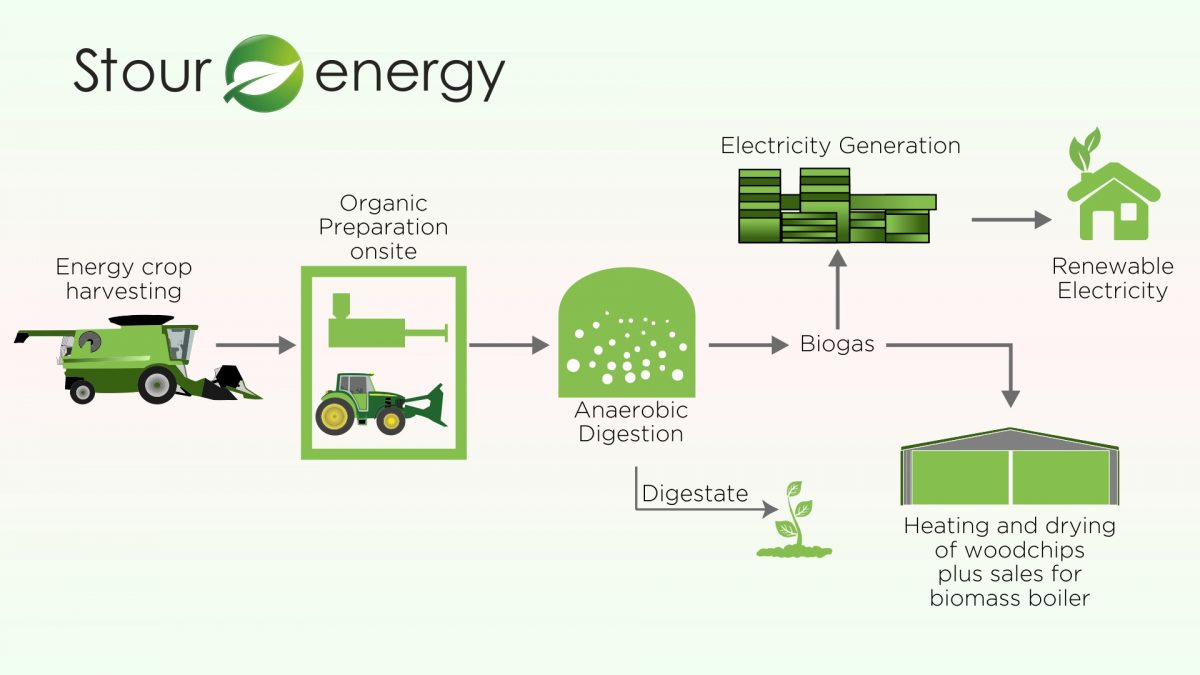 Anaerobic digestion is the process by which organic matter such as animal or food waste is broken down to produce biogas and biofertiliser. This process happens in the absence of oxygen in a sealed, oxygen-free tank called an anaerobic digester.

The word Anaerobic actually means ‘in the absence of oxygen’. The biogas naturally created in the sealed tanks is used as a fuel in a CHP (combined heat and power) unit to generate renewable energy i.e. electricity and heat.

What’s left from the process is a nutrient rich bio-fertiliser which is pasteurised to kill any pathogens and then stored in large covered tanks ready to be applied twice a year on farmland in place of fossil fuel derived fertilisers.
Here at Stour Energy we grow our own energy crops:

Our Energy crops are grown specifically for use as fuel and offer high output per hectare with low inputs. Research into which strains perform best under UK conditions, and typical outputs expected for different UK sites has been performed on a number of potential energy crops.

Maximizing outputs
In general the principle purpose is to maximize the output of the desired harvest. This may simply be measured in terms of tonnes of biomass per hectare, or it may be vegetable oil for conversion to biodiesel or sugar or starch for fermentation to bioethanol. High levels of biomass production need to be balanced against the potentially damaging impacts of some crop management techniques.

For example, very high outputs of biomass per hectare may be achieved from wheat, which typically yields 7.5-8 tonnes of grain per ha in the UK, (the record is 14 tonnes per ha), in addition to which there is typically 3.5-5 tonnes per ha of straw. The grain could be used to produce liquid transport fuels and the straw could be burned to produce heat or electricity.

Environmental impacts
However, in order to achieve these high yields, high levels of fertiliser inputs are required.

For wheat in the UK nitrogen fertiliser levels of 100-200 kg/ha are typically applied. This can lead to emissions of ammonia or NOx into the air and nitrogen compounds into groundwater. If this nitrogen is applied in the form of inorganic fertilisers very large quantities of carbon will be released to the atmosphere. This is because during the production of these fertilisers are Methane (CH4) is converted to ammonia (NH3) by reaction with nitrogen from and water vapour, with the release of the carbon as carbon dioxide (CO2). This is both environmentally undesirable and expensive, especially with increasing natural gas prices.

It is therefore highly preferable for energy crops to be developed that can achieve high levels of output with minimal or zero inputs.